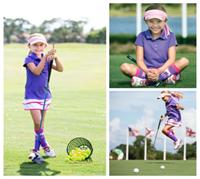 She has finished in the Top 3 over 80% of the time out of 150+ events. She’s also one of few to finish in the Top 4 17 out of 17 Major U.S. Kids Regional Championships where she has WON four time, Runner-Up four times, 3rd Place three times and 4th Place six times. Now that’s consistency!

Madison also has 5-Hole In Ones. One in a tournament and four others in official practice rounds.

Hole in Ones: Five

Goals:
* To have fun and give back
* To have a putting average of 1.65 or less
* To have a driving distance average of 250 by 13 years old
* Get a Scholarship to go to College
* Become an LPGA Professional
* To design golf courses after LPGA